My First Solo Backpacking Ever!!! Day 2

My first solo backpacking ever, day 2. What a tough cold night I had. I was so tired and fell asleep directly I got to bed after dinner. The cold came through my sleeping bag and pierced my skin, crushing and ravaging my bones. It was sooo cold, especially for a tropical entity like me. Lol… 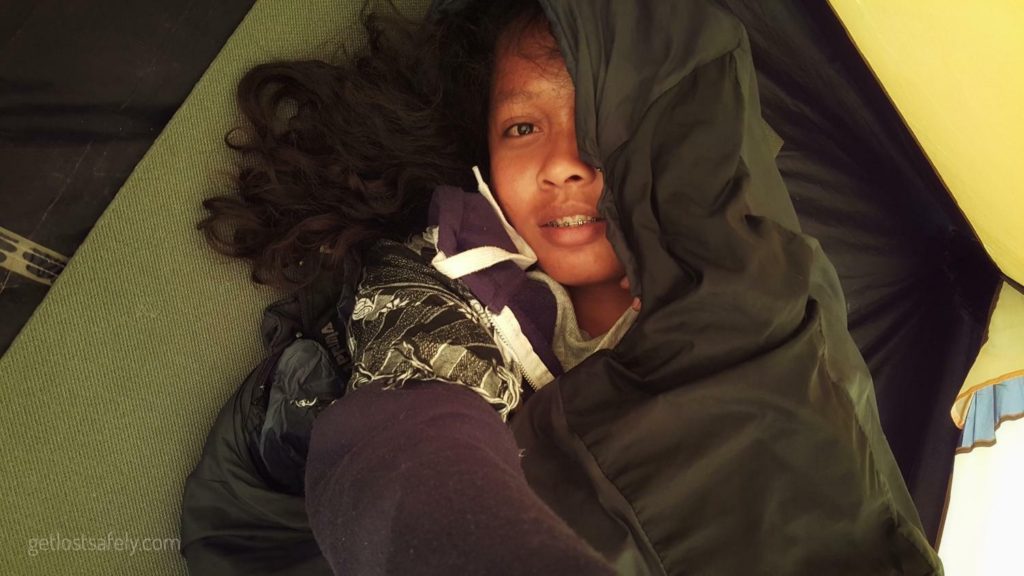 Day 1 was awesome, the adrenaline rush… You know, that kind of weird cool hormone produced by the adrenal glands. The stress and fear increased my blood rate, breath, even my carbohydrate metabolism. It was creepy yet soothing the inner me. It’s like my personal brand of ecstasy. Well yeah, I’m a junkie, an adrenaline junkie.

I brushed my teeth, depacked the tent, sun dried it, made a cup of tea, and enjoyed my fruity breakfast with this amazing view.  Great way to start the day. The second day of my first solo backpacking ever.

Along the Otava River to Annín

The plan is to go to Annín before lunch, have a rest for an hour or so and take my lunch there. The terrain was cool, along the Otava River flow. It was just the weather that dissapointed me. It was cloudy and gray, but at least wasn’t cold. The photos would be better with blue sky though.

The touristic line along the Otava River is really populer for water sport like rafting. Plenty of camp sites are located just aside the river bank. There are also other places to see such as castles and the unique cities or villages. Otava River was rich, nowadays the energy brought by the water flow is converted to electricity. 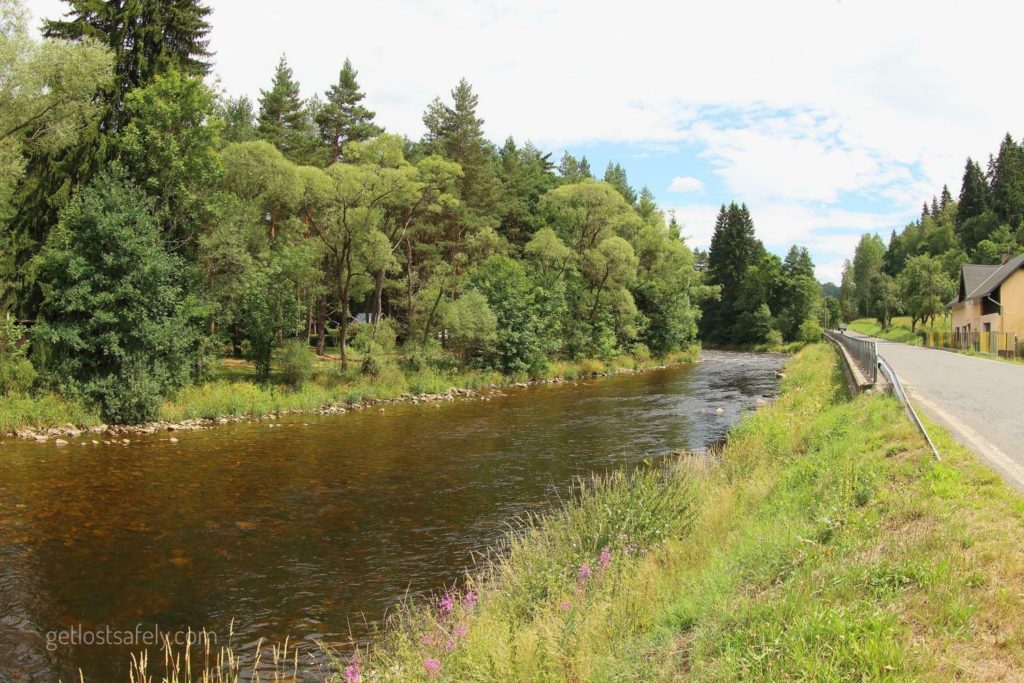 Long time ago, gold mining activity also performed on the area of Kašperské hory. Probably the creepy abandon village was the factory, I‘m not sure but it probably was. Even up to 1930, the Otava River was an important river as a migratory and spawning area of salmon.

I met amazing people along the way. They were amazed when I spoke Czech, although just the basic level. Czechs really appreciate people who are able to speak or willing to learn their language. The language is really difficult, uncomparable to English, the learning system is different and really difficult for me.

The houses I passed were much prettier than Disney Land. One stony house with a large garden caught my eye. Such a lovely cottage. Then I reached the entrance to the forest, guess what, it looked like it was closed. So I had a rest on a shack provided by some kind of czech forestry community, sipping the water and my dry bread.

Journey was still long a head, so I continued. The path was fine, just closed for cars. Long wide road was in front of me, some bikers were biking fast and faded away just in seconds. Dark gloomy forest it was, I got a bit chill. Then I met more people wandering the forest in group, some even with their children. Such an amazing holiday you can do with your beloved ones.

Having a rest in Annín, Czechia. Photo

More people were around, I was approaching. Annín is quite famous among rafters. Lots of great beautiful camp site around. I promised myself that I’m gonna have a rest in Annín and have lunch. So I roll the mat out just aside the Otava River in front of a really huge camp site.

Backpack on the bank of Otava River. Photo

After plus minus an hour I continued the mission, then a sweet couple stopped by and talked to me, they were bikers. They said that they saw me for the third time today, so we talked a bit. Like where I come from, did I walk alone and why, how could I learn Czech, how do I like the country and stuff like this. I was really nice talking to people, I hadn’t talked to anyone for a day at that time. They were such a nice couple, also heading to Sušice. Obviously, it’s not usual here for a girl to walk alone, especially backpacking. It feels good to do what I want and not just follow the trends in society.

The weather got better, the grey clouds faded away slowly. And the beauty of Otava River popped out, it looks better with the sun light. I got some great photos from another camp site in Annín. I think I fell in love with the nature in Czechia. 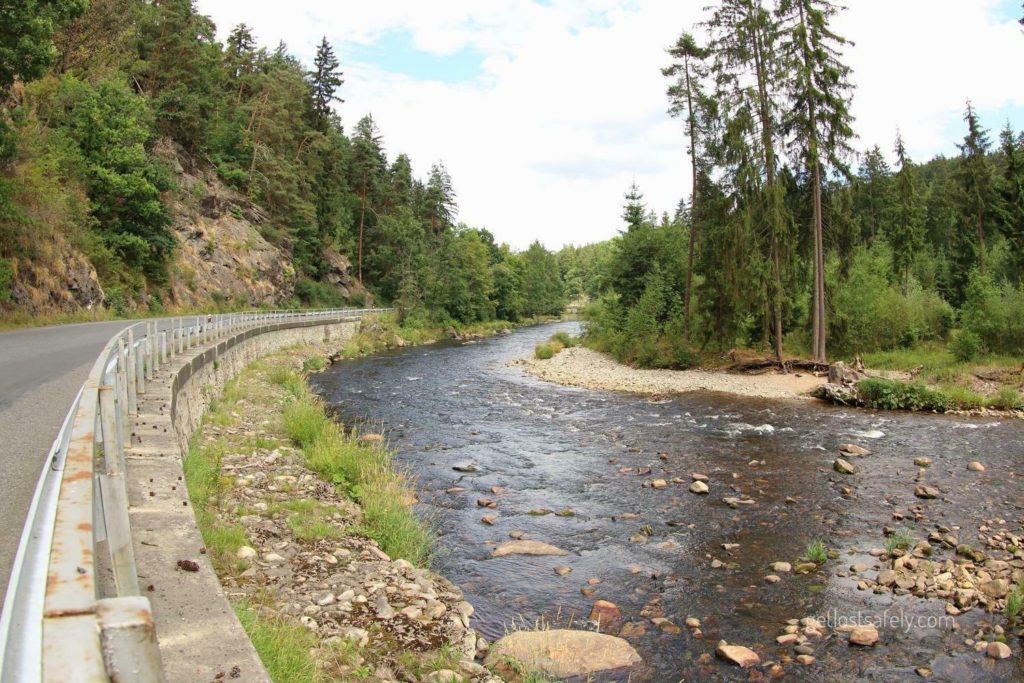 The terrain took me back to the forest. It felt so far. My Saturday was getting sunny, but I couldn’t do it no more, just wanted to take the bus to Sušice. Unfortunately, I didn’t know where is the bus station. Friend become foe, the sun shone too hard. It was hot. Then I reached a hill with fabulous view, a castle on top of the mountain on the other side.

I walked on the side of a farm. Lots of white cows around. Magnificent, I don’t really have proper words to tell you how beautiful it was.

Truck and farm on the suburban of Czechia. Photo 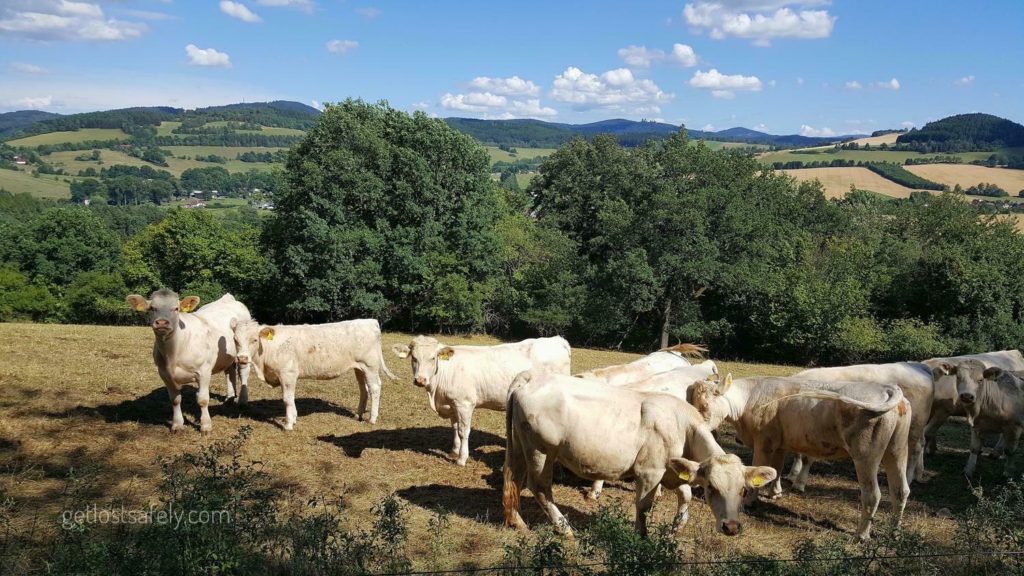 It was the hardest journey I’ve ever done in my life, alone. It feels good to have target in life. Sometimes it gets fu***ng hard, sometimes you don‘t know where is the end, but you know you gotta keep moving.

Am I already in Sušice?

Name board of Sušice. Photo

It was a park full of bikers, roller-skaters, skaters, runners and the other kind of sport doers. The sun was setting down slowly, then.. there is an information board. This place is called Červené Dvorce, and Sušice is just 3 km ahead.

Looks like the terrain was no longer the same because I was walking on the direction to the river. Marvelous. Such a quite and peaceful place, along the river in the amazing weather. Steps moving forward till I reached Sušice. I saw a really beautiful park, lots of pedestrians, swimmers, families, elders and teenagers spent their weekend summer time. I was sitting on a bench. Had a rest, drank water, watched the map and looked for the camp site.

Where am I? No waaay, it’s impossible. I was in Sušice, indeed I was, but the camping site is 3,5km farther from the area. My tears almost went down through my cheek following the gravity. I didn’t have any energy left while the sun was setting, and I had to walk for another 3,5 km? Damn.. Should I set the tent up somewhere here at the park? No way, the police officers will probably arrest me. I was not sure whether it was allowed to camp there. What should I do? For sure moving forward.

Resting on a park bench. Photo

I got lost several times which added a bit more of the distance. The beautiful Otava River started to lose its magic.

Tents were placed just aside the river. The camp site was just a bit more in front of me. That last steps were the hardest I had so far on my second day of my first solo backpacking ever. The closest the end is, the hardest it gets.

My heavy backpack fell roughly to the ground. Finally, my last destination. All I got to do was to set the tent up. I chose to make it on the closest place I could find. Slow but sure, I had it made. I’ll take care of the payment tomorrow.

Get lost in Sušice. Photo

The tent and sleeping bag were ready, I just needed to change my wet clothes. I was crossing the river and met a dead end, hence I got wet clothes on me all the way to the camp site. Lucky me, they had public bath room, 30 Kč for 10 minutes shower with warm water. Warm water never felt that great before.

I deserve a present. So I got myself a bowl of spicy instant noodle, potato pancakes and Czech beer. I’m not a huge fan of beer, but believe me, Czech beer is worth to try. They have the best beer in the world, it’s part of the culture. They are the number one in the world with the highest number of consumption. No wonder, the price of the beer is even cheaper than a bottle of water.

Another side of Paddling Camp Site, Sušice. Photo

I was thinking a lot that evening. How lucky we are as human being. Blessed to live in this amazing blue planet. I guess Eve was not so bad after all, we are kicked out from heaven for this life. How lucky we are to have home, enough food and beloved people around us. Backpacking has changed my life. It teaches me to be grateful, to understand that nature and diversity are the best presents for human being. 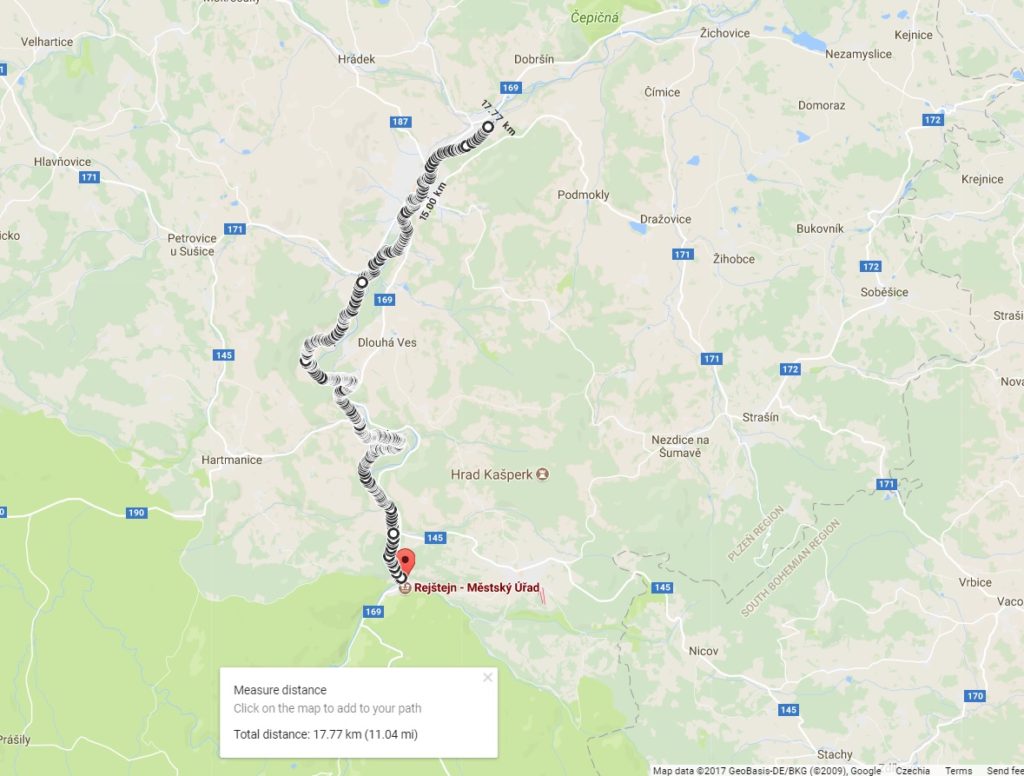 Writing this story down helps me to know that I was walking for 17,7 km. Unbelievable, I never thought I would have done that far. Sometimes you are just underestimating yourself, it’s okay, it keeps you down to earth. But you will never know when you never try.

Look deep into the nature, and then you will understand everything better –  Albert Einstein.

Lootss of snow this year ❄❄😍 Such a shame w

Our best Christmas gift 🎁🎁 this year. Even t

Never thought I would be able to love someone this

This website uses cookies to improve your experience while you navigate through the website. Out of these, the cookies that are categorized as necessary are stored on your browser as they are essential for the working of basic functionalities of the website. We also use third-party cookies that help us analyze and understand how you use this website. These cookies will be stored in your browser only with your consent. You also have the option to opt-out of these cookies. But opting out of some of these cookies may affect your browsing experience.
Necessary Always Enabled

Any cookies that may not be particularly necessary for the website to function and is used specifically to collect user personal data via analytics, ads, other embedded contents are termed as non-necessary cookies. It is mandatory to procure user consent prior to running these cookies on your website.